What follows are examples of some of the major types of syntactical glossing. This sample is designed primarily to help scholars working with glossed Latin texts to recognize syntactical glosses when they see them, and — we hope — to report them to us for the inventory. It is not exhaustive and its typology is informal and provisional. The Inventory itself will give a much more complete account of the various types of glosses and, eventually, a controlled vocabulary for describing them in manuscript cataloguing.

When we study syntactical glosses, we want to know both what they look like — a paleographical question — and what they are doing, which is a matter of syntactical doctrine and analysis of the text being glossed. Glosses that look very much alike may be doing very different things, and, conversely, glosses that look different may be giving similar kinds of syntactical help to the reader. Moreover, syntactical glosses almost always cooexist on the page with other types of glossing, and may look identical to marks that have nothing to do with syntax, like signes de renvoi or lexical glossing.

To supplement and summarize what follows, here are some ideas about what to look for when you are trying to spot syntactical glosses:

Unexplained dots and squiggles. These may look identical to signes de renvoi; if you find signes without referents, you may have syntax marks, instead.

Word-glosses that don’t seem to bear any lexical relationship to single lemmata. They may be cuing something about the structure of the sentence.

Single letters over the parts of a sentence, as in the header image of this site.

Read on for more specifics.

A SAMPLING OF GLOSSING TYPES

Letters written over or under words in a sentence may suggest the order in which the sentence is to be construed. Whether the order so indicated is a natural-language order related to the reader’s vernacular or merely a tool of analysis is a matter of scholarly controversy. It is likely that paving letters serve different purposes in different manuscripts.

Some manuscripts have groups of dots that serve the same purpose as paving letters, indicating the order in which the parts of the sentence are to be construed. (See the articles by Robinson and O’Neill in the bibliography.) These may take the form of groups of one to five or more dots arranged horizontally under words, as in the Lambeth Psalter (London, Lambeth Palace Library, MS 427), here in a transcription by Robinson from “Syntactical Glosses in Latin Manuscripts of Anglo-Saxon Provenance.” Speculum 48 (1973): 443-475, at p. 456:

Other manuscripts have groups of dots clustered over words to indicate order, as with the glosses to Boethius in Cambridge, Corpus Christi College, MS 214 (also transcribed by Robinson, “Syntactical Glosses,” p. 457): 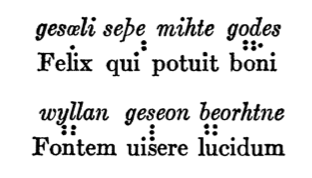 Commas, comma-dot combinations, or dot-stroke combinations may be used to signal concord (identifying a noun and the adjective it goes with, for example) or to pick out the major elements or boundaries of a clause. In the latter case, the normal pattern seems to be to put matching signals under an initial adverb or conjunction and under or over the clause’s main verb. If the parts of the complete verb — for example, a finite verb and its infinitive complement — are separated, the symbol may appear under both parts.

In Robinson’s trancription from the Lambeth Psalter reproduced above, the comma under Nam matches one under non in the line below, signaling that Nam begins the clause and non timebo is its main verb.

We have found several examples of boundary glosses in which the beginning of a syntactical unit is marked by a symbol under a word and the end of that unit is marked by a matching symbol above a word. Here are two examples, transcribed from Bede’s prose Life of St. Cuthbert in London, British Library, MS Cotton Vitellius A xix. The words with syntactical glosses are picked out with blue or orange rectangles. In the first example, a dot-squiggle combination goes under the opening words (a finite verb and postpositive conjunction) of one clause and over the infinitive that marks the end of that unit. In the second sentence in this extract, a trio of dots serves the same purpose, going under the clause-initial conjunction and over the verb at the end.

In the next example, above-and-below dot-stroke boundary glosses pick out et at the beginning of the clause and the verb intrauit at the end (marked in blue here), while above-and-below triple dots link the members of an ablative absolute (marked in orange). Whether the glosses on hoc…transcenso are better understood as boundary glosses, marking the limits of a syntactical unit, or linking glosses, identifying a pronoun and the participle that agrees with it, is a matter for investigation.

Suzanne Reynolds found a distinctive type of boundary glossing in a late-12th-century manuscript of Horace’s Satires, London, British Library, MS Harley 3534. In this manuscript, the word ordo is split into two pieces — or and do — which are used to signal the beginning of the sentence and a very delayed main verb. Here is an example transcribed by Reynolds, Medieval Reading (1993), p. 118:

These are interrogative words or phrases drawn from the rhetorical circumstantiae, which are like the journalist’s “who, what, when, where, and why?” In glossing, the Latin versions of these interrogatives are used to identify functional elements of the sentence: “Quis” is the subject; “quid” the verb; “quam rem” the direct object; “ubi”, “quomodo”, etc., various adverbials; and so on. This kind of glossing mirrors the teaching of the St. Gall Tractate (ed. Anna Grotans and David Porter, The St. Gall Tractate: A Medieval Guide to Rhetorical Syntax, Columbia, SC: Camden House, 1995), but we do not yet know the relationship between that treatise and the extant glosses of this type. We are particularly eager to hear about more examples of this type.

Here is a transcription of circumstantiae glosses to Prosper’s Epigrammata in in Cambridge, Trinity College, MS O.2.31, transcribed by Carin Ruff in “Misunderstood Rhetorico-Syntactical Glosses in Two Anglo-Saxon Manuscripts.” Notes and Queries (June 1998): 163-166, at p. 163: 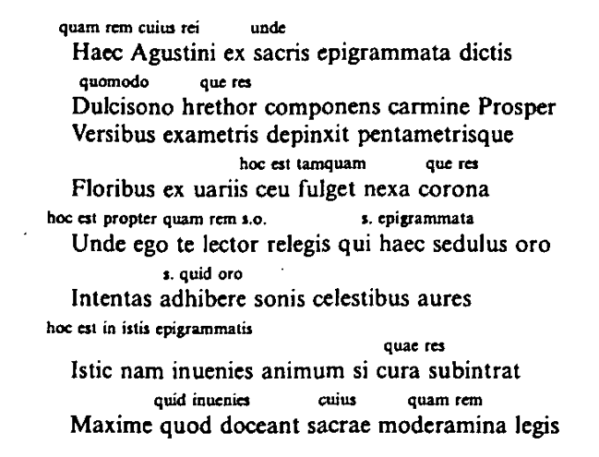 There are undoubtedly more kinds of syntactical glosses out there, and we are eager to hear about them. Use the reporting form to let us know what you find out there in the wild.